One more day less to Cobra Ironman Cebu, and I am praying.  Let me share this with you…

Will the saying, “Do your best, and God will do the rest.” will be my race slogan? I am a Roman Catholic, practicing but not a devoted one though (I will get some good words from my Aunt who’s a nun when she reads this), but a believer that there is a Might One up there, the one we all call God. I believe also in the power of prayers, especially a Novena. According to Google, St. Sebastian is the Patron Saint of Athletes, the saint who was martyred twice. He was ordered by the Roman Emperor to be shot by archers with arrows. Miraculously, the arrows did not kill him. The Emperor then had him beaten to death. He is Patron Saint of Athletes because of his physical endurance and his energetic way of spreading and defending the Faith. St. Sebastian is also patron to all soldiers. He was declared patron of plague sufferers of his reported cures of those afflicted with many diseases. 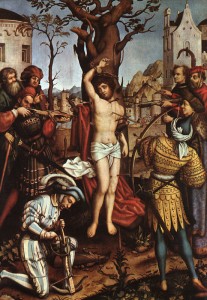 I copied a nine day novena that I should start praying to finish on time for race day. This is the Novena …

Dear Commander at the Roman Emporer’s court, you chose to be also a soldier of Christ and dared to spread faith in the King of Kings – for which you were condemned to die. Your body, however, proved athletically strong and the executing arrows extremely weak. So another means to kill you was chosen and you gave your life to the Lord. May athletes be always as strong in their faith as their Patron Saint so clearly has been. Amen.

I also believe in chants and mantras too. My sister once told me of the Tibetan chant “Om mani padme hum” which is revered by the devotees of Dalai Lama.  Quoting Wikepedia, this chant translated in English  means “Thus the six syllables, om mani padme hum, mean that in dependence on the practice of a path which is an indivisible union of method and wisdom, you can transform your impure body, speech, and mind into the pure exalted body, speech, and mind of a Buddha[…]”– H.H. Tenzin Gyatso, 14th Dalai Lama.

Here’s a video of the well known Tibetan Chant…

Pinay Ironmom is a typical mom who wakes up before 6 am to prepare my 3 children for school. After this, I make my husband coffee, similar to the Nescafe commercial on TV of a couple's typical morning. Work is normally a tour of Northern or Southern Luzon to inspect projects we are building, checking quality of designs or preparation of presentations to prospective clients. My schedule is flexible luckily, I can squeeze in hearty lunches with my favorite lunchmate and training early in the afternoon or right after business hours. Weekends are bike days on Saturdays at MOA or Daang Reyna and Sunday is my me time - my long run day. Oh warm ups and stretchings are trips to the grocery, cool down is hearing mass and giving thanks to God for a wonderful week. This is ME :)
View all posts by pinayironmom →
This entry was posted in Race, Training, Triathlon and tagged Cobra Ironman 70.3, Cobra Ironman Cebu 2012, Ironman, Ironman 2012, Ironman Cebu, Ironman Philippines, Race, Triathlon. Bookmark the permalink.